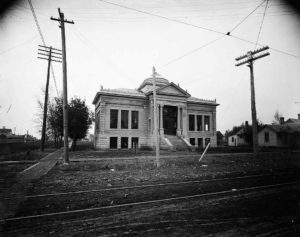 The Clay County Library was officially formed in 1949 after many years of extension service provided by the Moorhead Public Library. Three lines of extension were established: 1) loan books to all county residents 2) library services extended to rural schools and 3) traveling libraries -“stations” – would remain in rural towns for two months at a time offering 25 to 50 volumes to residents.

The Moorhead Public Library opened its doors on July 12, 1906. Librarian Miss Nelle Olson welcomed patrons as they perused the 1000 books the library had to offer. Planning for this big event began in 1903 when attorney George E. Perley secured a Carnegie grant of $10,000 to build a library in the city of Moorhead. The only stipulation was that the city provide a site and maintain the library after construction is completed.

The Friends of the Norman County Library Services persuaded Norman County Commissioners to establish library service in cooperation with a neighboring county in 1960. Clay County, along with the libraries in Barnesville, Hawley and Moorhead, was chosen by Norman County as the neighbor best suited to share library services with. After several months of negotiations, a contract was signed June 1, 1961 to form Lake Agassiz Regional Library. Library service officially began in Norman County in August, 1961.