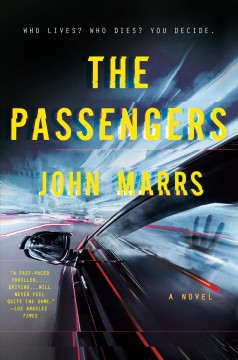 A terrifying glimpse into the near future.  Eight passengers are in self-driving cars that have been hacked. Now they are trapped in their vehicles going to an unknown destination. The twist, hidden cameras have been placed inside the cars and the world is watching. Through social media, the public can also vote on who will survive. Secrets are revealed as a jury consisting of government officials and one citizen attempt to convince the general public who should live and die. By the end no one is really who you think they are.

Read the book that has been adapted into a Netflix series.

Want to support the work we do? Help your library foster connections between community members and valuable resources and services.
Support the Library
The Mahnomen Public Library will delay opening until noon on Friday, January 27 due to weather conditions in the area.
Back To Top
×